The Red Rose Inn has always been an important part of Penn Township’s history. The origin of the Inn dates back to the 1700s when 5,000 acres was deeded to William Penn, III. The property was leased at a cost of one red rose per year. The deed specifically stating “his heirs and assigns forever pay one Red Rose, on the 24th day of June, if same be demanded.” Thus how the name “Red Rose Inn” eventually came about.

In 1742 William Penn deeded the 5,000 acres to his grandson, William Allen. Allen sold about 55 of the 5,000 acres to a Samuel Cross in 1748. The original structure of the Red Rose Inn, which is that structure that is still standing today, had allegedly already been built by Cross between 1731 and 1740. Cross had built the Inn with the intention for it to operate as a tavern; although there was no record issued in Cross’s name for it to operate as a tavern until 1762. After 1763 records become unclear as to what the Red Rose Inn was being used for and who was operating it. Records from 1797 show the Inn was sold to a George Clymer, it is unclear if it was sold due to Samuel Cross’s death or if he had become bankrupted.

In the 1800s the Red Rose Inn was bought and sold several times. In 1808 the Inn was sold for $856 by 1882 it sold for $8,500. In 1889 the property was sold to a Mr. John A. Wallace. The Inn was renovated, remodeled and opened as a hotel under the name Red Rose Inn in 1927. During World War II the Red Rose Inn was closed and taken over by the National Fireworks Company. They used it to board their employees; forty five female employees were housed at the Inn. The Inn was purchased by the Clantons in 1961. In 1978 John and Mary Ann Bussey bought the Inn and in 1985 Lee and Richard Covatta purchased the Inn. The Red Rose Inn operated as a restaurant and bar for many years. Overnight lodging was even available to guests. 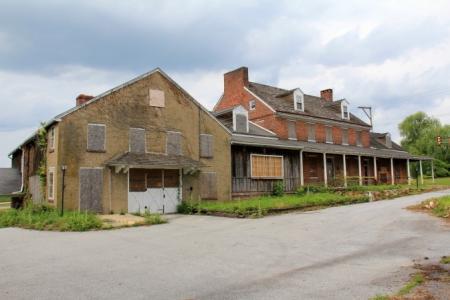 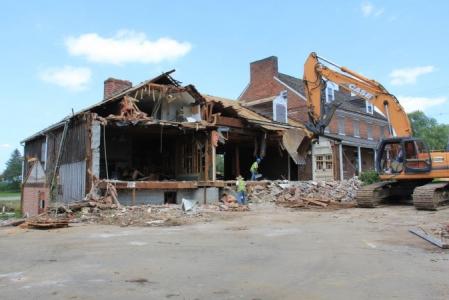 The Ghosts of the Red Rose Inn

The Red Rose Inn is located on what was originally an old Indian trail used by the Lenni-Lenape tribe, and later the settlers to travel between Philadelphia and Baltimore, hence the current name of Baltimore Pike.

Throughout the Inn’s glory days, when it was a functioning a restaurant and tavern there were many reports of moving objects and ghostly sightings. Many former Red Rose Inn employees and patrons are convinced that the Inn had several phantom residents.

As the legend goes, the two ghosts who appeared most frequently were that of Emily, a little girl in an old-fashioned dress, with curls and a doll, and Joe, a Native American or “Indian Joe” as he is called. The pair frequented different portions of the house, but are nevertheless linked for eternity. According to the tale, Emily was found murdered and the villagers accused Joe and promptly hung him reportedly from the tree on the corner. They later discovered the identity of the killer, who was found drunk in the woods. In an effort to conceal the murder of Indian Joe, they buried him in the basement; hence why, his body and spirit continued to roam the basement bar area.

Emily had always appeared in the main dining area, around the bathrooms and on the staircase, passers-by had reported seeing her looking out of the windows onto Baltimore Pike for years or ascending or descending the central staircase in the Inn.

In 1987 there was a reported sighting of an older female ghost standing at the bar in a shabby looking coat. The bartender at the time was cleaning up after hours when he saw her. Knowing all the doors were locked, he approached her and asked how she got inside but she apparently just vanished without answering.

Since Penn Township has owned the Inn and started the renovations, there have not been any ghostly sightings or strange encounters to report.

Whether you are a believer or not, the legends and stories do make you wonder. The next time you catch the red light at the corner of Route 796 and Baltimore Pike, take a step back in time, and look into the windows of the Red Rose Inn………..if you dare. 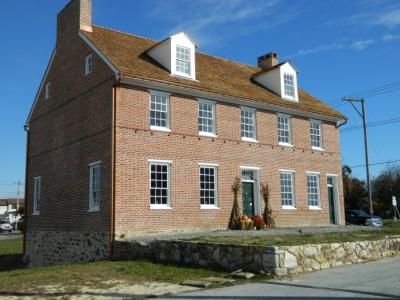 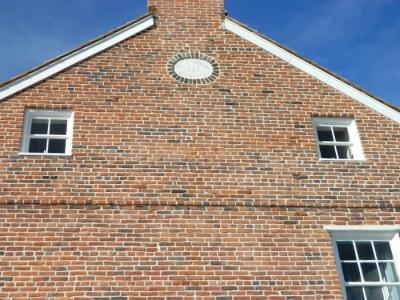 The official Red Rose Inn renovation project kicked off in 2016. Penn Township removed all the added-on structures and expansions that the Inn acquired through its years under various owners. What stands is the original building that was constructed in the 1700s. The Penn Township Historical Commission has been working hard to restore the inside of the building to its “original” condition.

Although the building is a popular historical landmark, the building will never be considered “historical” because of the extensions and remodels the Inn underwent throughout its life time.

As of January 2020, the Inn is virtually unrecognizable from the Red Rose Inn most knew in the 1990s. The beautiful renovation has brought a lot of life back to the old building. This past year the inside transformation began. There have been many skilled workman finishing the walls, floors and doors. Colonial style hardware and lighting was also installed.  The Inn has regained its charm in preparation for a display of Penn Township History in the coming year.

One of the highlights of the restoration process has been the return of the William Penn mural to the wall of the Red Rose Inn.  Many will remember the mural depicting William Penn receiving the symbolic Red Rose as “rent” from the occupants of the Inn in the 18th century.  It was painted on a 18’ by 6’ canvas by Maryland Artist John Moll in the 1960s and “glued” to the wall in the main dining room of the Red Rose.  When the township purchased the Inn, Supervisor Curtis Mason carefully removed the canvas, rolled it, and stored it in the township building.  In the summer of 2019, London Grove Framing was asked to mount the canvas for reinstallation in the Inn.  They did a beautiful job with a structural frame.  The challenge was to find a vehicle large enough to transport the newly framed mural back to the Inn for installation.  A 20’ produce truck, generously provided by Yates Produce of Penn Township, proved to be the right size and the newly mounted mural was carefully loaded and unloaded at the Inn.  Luckily, it was a straight line from the front door to the room in which it was to be installed.  And again, luckily (and with prior planning) the wall on which it was hung was the perfect size–with inches to spare! 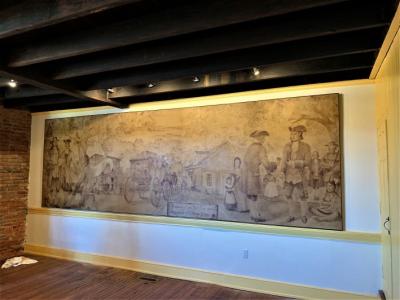 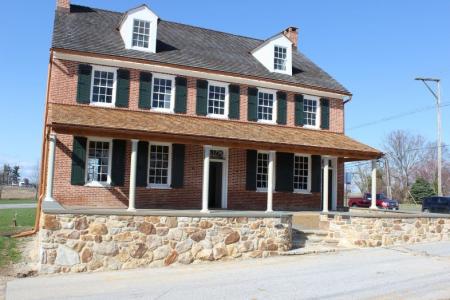 A special note – More of the history on the Red Rose Inn and the most of the surrounding area can be found in Penn Township – A Pictorial History, 1681-2002 by James J. Boyd. This book was referenced several times for The Historic Red Rose Inn article. Copies of this book can be purchased at the Penn Township Building.